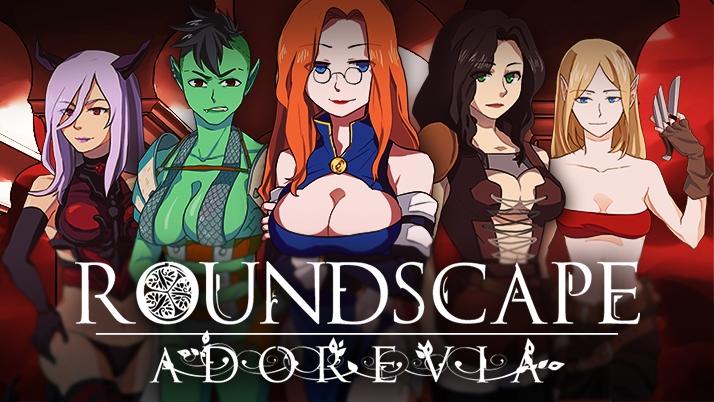 Roundscape Adorevia v5.8b by Arvus Games, Roundscape Adorevia it’s a great game with a fair amount of content , pretty nice gameplay (for a RPGM) and good artwork, the history can be a lot better. But that’s not why you´re here right?

So the game starts out in one of 5 ways of your choice, eventually you end up in a small town and go on a quest to prevent some evil being. You can choose your gender and there are some exclusive scenes for each gender.

The world of Adorevia is one fraught with danger, but also adventure for those brave enough to seek it. Walk the lush forests, see the magnificent dwarven city-states, and help stop a terrible threat that could spell doom to countless innocents as you head out on your quest! Of course, along the way, you’ll find other brave souls willing to share in your adventures, and perhaps, your bed.

And of course a lot of smaller stuff that improve the immersion and soul of the brothel.
Bugfixes
– Fixed a bug where Meredith would disappear after her pregnancy
– Fixed several Gallery bugs, we’re not all there yet but the gallery will be soon completely polished
– Fixed several smaller issues such as stuck parallax graphics and typos

Release: Roundscape Adorevia 5.0 Tilan
Hey folks!
Tilan is finally here, we hope you enjoy the storyline we’ve crafted for Roundscape.
What begins as a simple request for help from a Queen may turn out to be the Hero’s most dangerous adventure yet.

– Vesunna bug fixed where you would be stuck with vesunna after entering the first destroyed home.

– The Felicia and Zeyga Gloryhole scenes now work as intended

Download For Win x64
MEGA MIXDROP ANON NOPY
WALKTHROUGH & EXTRAS
WALKTHROUGH SAVE RPGMAKEREDIT
Save Fix
MEGA WORKUPLOAD RACATY *Only use this fix for save files made with or below version 4.3