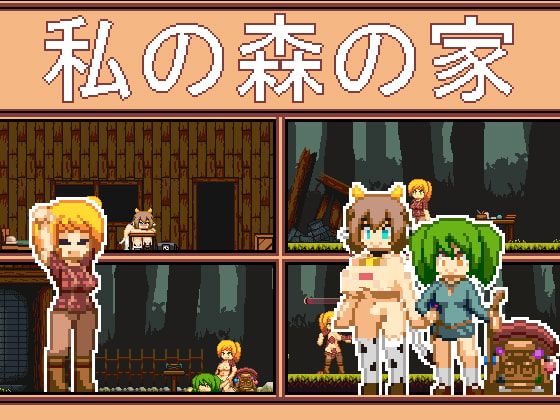 My Forest Home v2.5 by ChimeraZak, My Forest Home is a game about a sudden earthquake destroyed Azumi’s house. But living in a forest is very dangerous. She need to build a new house before the monsters’ raid.
You play as a girl who needs to quickly rebuild her house in the forest. Gather resources, fight monsters, build a house, sell resources for money, and buy “special” goods.​

Other
If the game seems complicated, you can lower the difficulty level in the settings.

Changelog
v2.5.
– New gravity and improved jumping. It feels a lot better now.
– New ax, now it’s bigger.
– New base of attack:
1) Two combo attacks that can be spammed.
2) On the second attack, pressing down + attack do a strong blow.
3) Charged attack on the ground: throw an ax in the manner of a boomerang, deals damage twice.
4) Charged attack in the air: Strike the ground, which deals double damage to everyone it hits, it is also possible to break the ground in the right places.
5) Throw a charged ax: teleport to the place where the ax lands!

– New base of movements:
1) Crouch and crawl: Now there is the ability to crouch and crawl, which allows you to dodge shots.
2) Ladders!
3) Wall attachment! Now using the air attack close to the wall, you can attach to it!

v2.35
– Redrawn monsters and scenes with them: wolf, shooting plant, tentacle plant, flying demon.
– Reworked the behavior of the above monsters (a little, but still it will be noticeable)
– Added Konck Down for the player.
– Added scene for two slimes (very lazy scene)
– Added new effects (they will be redone since the color is not very good)
– Fixed a lot of unnecessary things and now the game loads less CPU.