Inquisitor Trainer v0.32 Polished by Adeptus Celeng, Inquisitor Trainer is a game about The game based on naughty and perverted dark gothic era of the far future.
Which you, Player will take the role of a young female protagonist, tasked to investigate the disappearance of several officials and other mysterious cases in the city which might be related to certain heretical cult.

However, she will not conduct her investigation in a conventional manner, due to her lack of training and proper equipment.
She will have to ‘improvise’ and to use whatever means necessary to achieve her goals.​ 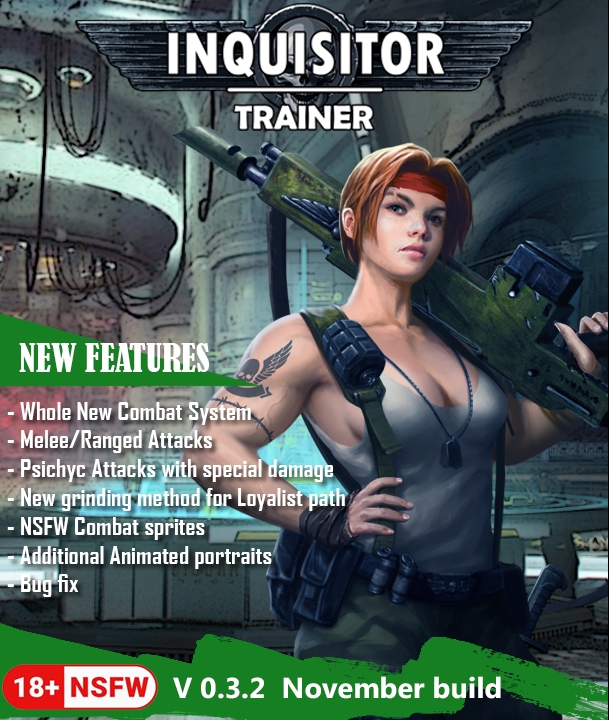 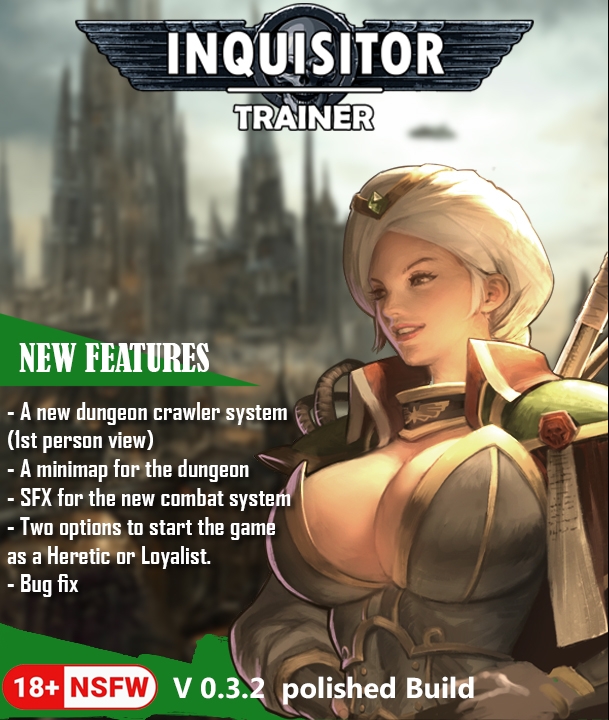 v0.27
1. The introduction of two new Characters : Alicyra the felinid abhuman and Sister Genevana the repentia
2. Four New NSFW scenes in the brothel.
3. A new place called ‘The Pink Pearl’ Which is a Brothel, and it is accessible in the mainmap during the night.
4. Heidi will be able to choose to be a female or a futanari in all of this content updates sex scenes

v0.27
1. The introduction of two new Characters : Alicyra the felinid abhuman and Sister Genevana the repentia
2. Four New NSFW scenes in the brothel.
3. A new place called ‘The Pink Pearl’ Which is a Brothel, and it is accessible in the mainmap during the night.
4. Heidi will be able to choose to be a female or a futanari in all of this content updates sex scenes

v0.26
1. The introduction of the romance feature or relationship side story in the game, and in this content update the character will be Roxxi the Jungle Fighter that was introduced before.
2. Added several Roxxi new character portrait
3. Added 3 LEWD scenes of Heidi and Roxxi
3. Added new animated sprites for heidi when she sleeps in her quarters and when she reads in the library
4. Added a new area in the game that are located in the undercity. This area will be accessable via the Turbo elevator.
5. Cargo cult Karol will now have her own shop and at this moment she will sell stuffs that are related to the relationship side story in the game.

1. The continuation of the main storyline “Trouble in the Undercity” Which focused around the Alien Creeper Cultist, and the disappearance of the Governor’s daughter.
2. A new NPC called Lionel who is a son of a rich and important person from Holy Terra. (A parody from a canon 40k character)
3. NEW enemies for the new sexy combat system where you can strip the enemies of their armor before killing them.
4. A new animation style for a new lewd scene (this scene will be related to the ‘trouble in the undercity’ story arc.

I have a mini update this weekend, this update contains several fix regarding the skill and currency system, also some additional lewd scenes
The details are:

What’s new:
-Day/Night Cycle System — player can cycle the time of the day by waiting from noon till evening (done by clicking the hourglass icon in the mainmap) and by sleeping from evening until morning the next day (done by clicking on the bed in the apartment room)
-Number of days — the total cycle of the day are now shown in the upper right corner of the screen at this time there are no date limit for the game, it can run indefinitely, and no event are triggered by the date yet.
-Currecy System — Players can now obtain dan spend credit points in the game. There are multiple ways to earn money in the game, and there are also multiple ways to spend them. These will be needed for storyline progression.
-Several new unlockable areas — a library in the headquarters, a stipclub in the bar, a dark alley in the undercity, a drukhari torture dungeon, and a mechanicus pawn shop.
-A new merchant NPC — A goofy mechanicus called Styx the Broken can be found in the undercity. His shop only opens during daytime. He is the only merchant at the game At this point. Vugnog the bartender can not sell any liquor at this moment.

Note:
-Bug issues — the game have not been thoroughly tested, there might be bugs and errors in this update version. we hope patrons will help test the game and provide us with feedback and reports. we will address them in a few days (we will release a fix within a week)
-Placeholder conversations — A lot of the dialogues in the game are still a work in progress, we are still working on the storyline and dialogues at this moment.
-Placeholder areas — Some areas are still not opened yet, and there are no actions for the player to perform on those areas.
-Storyline content — the new content in this update ends when heidi engages in the second sexual encounter (there are TWO sex scenes) with the dark eldar.
-Save game issues — save game from previous version will not work on this update. we will provide with a savegame as a starting point for those who wish only to play the content of this month only.
-The attempt to provide a looping movie animation failed — we convert the movie file into a GIF format for the time being, we will address this issue as soon as possible.

And by the way, you can overwrite these files inside the folder game for a quick hotfix. I’ve found the problem in my combat system and have solved it.

Here’s what you have to do with this file on your PC :
1. Download the .rpy files that I’ve attached in this post.
2. Open the Inquisitor Trainer folder, and look for the game folder inside it.
3. Copy and overwrite these files inside the game folder.